A Finale and A First Step

Spoilers ahead for The Mandalorian Chapter 16

I'm not one for rushing out prose on recently released Star Wars content. I prefer to let the words sit in draft for a time, until my thoughts have fully formed and I can release something of value. (Hence why I have so many draft versus published posts!) But The Mandalorian has had a profound effect on me, especially the season two finale. I feel compelled to get my thoughts out of my head as quickly (for me) as possible!

It's easy to get swept along with the extra-universe content for the show, especially online speculation, discussion and reviews. It can at times feel like we're all supporting a sports team that competes every Friday for glory, and we're not always on the same side. Sometimes it's good to step away from the noise outside the series and simply let a show like The Mandalorian wash over you. Such was the hype surrounding the series two finale that I really tried my best to approach it in this manner. And as a result I was not disappointed by a single thing, and very nearly brought to tears...

I'm loving the pacing the show has developed - a no-nonsense approach that throws the viewer in to exactly what the filmmakers want us to see, when they want us to see it. Boba Fett? Get him in episode one. Perhaps they'll gradually tease Ahsoka into Chapter 13? Nope, white lightsabers within two and a half minutes. Who should answer Grogu's Tythonian call? Surely not the Luke Skywalker? Yep, and you know what? Let's not recast, let's build on existing technology and show him how we'd imagine him to be. Oh, and let's show what he can do in his youthful prime, cutting through Dark Troopers with the green-bladed lightsaber that we'd only seen tentatively spar with skiff guards and Vader way back in 1983. And lastly, R2's here too for good measure. Wow.

It would have been easy for season two to simply be a greatest hits of cameo appearances. Too many more and perhaps it would have become dull and distracting from the central story, but I think just the right balance has been struck - making best use of the time our visiting heroes are present.

The final scene between Din, Grogu and Luke is one of, if not the, most emotionally charged moments in all of Star Wars. That this can be achieved between a man who rarely takes his helmet off and a puppet is testament to the incredible writing and direction of the series. 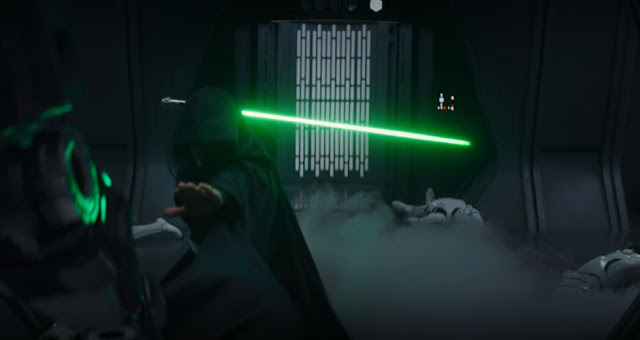 So Din and Grogu take their first steps away from each other. I have no doubt that they will be reunited again and - in the manner that the show keeps surprising us - possible sooner than we might think.

Nonetheless, there are so many paths in which the show could head. Will Grogu indeed stay with Luke? What of the fate of the Darksaber and the unintended dynamic that now exists between Din and Bo-Katan?

Have we indeed finished reading The Book of Din Djarin, at least for the moment? I doubt it. The Book of Boba Fett (introduced in the post-credits sequence) is now confirmed to be a separate series from The Mandalorian. For the few days that I considered the Boba Fett angle might be part of the same show, I was intrigued by the possibilities. Could we then have moved on to the The Book of Bo-Katan and have returned to the Din / Darksaber storyline?

As much as I want to see Din's story continue, such an approach does appeal to me. A complete collection of Mandalorian stories that weave in and out of each other. With the announcement that other Disney+ series will interlace with The Mandalorian, such as Ahsoka, we seem to be seeing multiple threads of the same story starting to be told - within and without The Mandalorian itself. The possibilities appear endless.

On Grogu, I'm excited to see how his story continues. It struck me that perhaps R2 and Grogu have indeed met before, a (human) lifetime ago in the Jedi Temple of the Old Republic. The prospect of perhaps seeing Grogu's early years in flashbacks is mouth-watering.

What of his future with Luke? Will the training of Grogu be one of the first failures Luke experiences, setting him on a course to become the disillusioned figure we see in The Last Jedi? That would certainly help get The Child back to where I'm sure the audience considers he belongs: with Din.

This is the most exciting Star Wars storytelling perhaps... ever?

A place for celebrating the escapism of Star Wars, SWTOR and all things far, far away....
Twitter: @SW_Explorer