I've never really bothered with the achievements aspect of SWTOR. But every now and again I get into a bit of a lull in my gameplay and I go searching for something to do. Recently, in one such lull, I stumbled across a forum post where someone was complaining that there was nothing to do at endgame. Another player replied, retorting that there was 'never a shortage of things to do' in the game - providing a long list of activities the original poster might like to try.

The list really struck me and the more I thought about it the more I realised that, 'Yes, there's never a shortage of things to do!' Among the long list was working on achievements.

Recently I've dug into trying to complete some and I've had a lot of fun. The best ones are of course the ones with rewards: be it a title or a few extra Cartel Coins. The legacy titles in particular have attracted me, and stumbling across the title reward Galactic Explorer, I knew that if I only ever completed one more achievement it had to be this one!

A couple of days later (and a lot of exploring on Nar Shaddaa - that place is a maze) and I'm now a bona fide explorer! 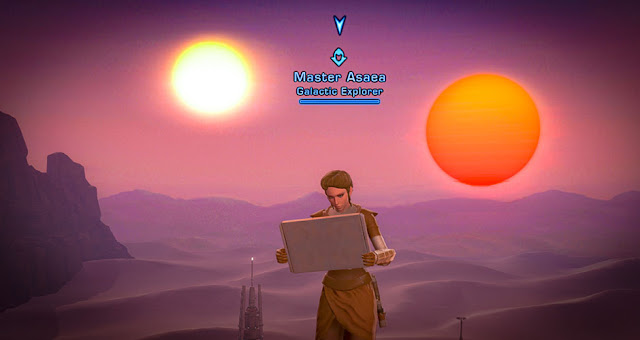 I had fun chasing the achievement. I don't think I'm turning into a completionist particularly, but I may dig into the achievement list more often now.

A place for celebrating the escapism of Star Wars, SWTOR and all things far, far away....
Twitter: @SW_Explorer